Yesterday, the Kings and Turner Construction hosted a Contractor Outreach Meeting at the Robertson Community Center to celebrate a win for Kings fans and to discuss potential contracting opportunities for local business.  Both the fans and businesses came out in large numbers for the first of five scheduled meetings. 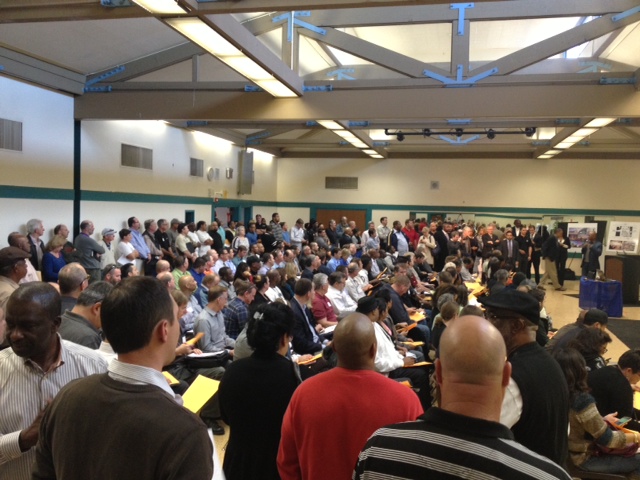 For those not paying attention to King’s battle for a new arena, February 27, 2014 marked the day Superior Court Judge Timothy Frawley denied the lawsuit brought on by STOP, an association opposed to building a new Sacramento Arena. With the ruling it nearly guarantees that Sacramento will soon start construction on a new King’s arena in downtown Sacramento.  STOP, or Sacramento Taxpayers Opposed to Pork and Voters For A Fair Arena Deal obtained over 23,000 signatures to try and force the arena deal to a vote on the ballot.  Only a successful appeal from STOP will prevent the arena deal from moving forward.

The construction of the new arena is estimated at $448 million, of which the City will contribute a maximum of $258 million.  The remaining balance including cost overruns is paid by the Sacramento Kings.  The plan to build the arena will have a labor agreement, though the City will still have portions that are non-union. Turner Construction will be the general contractor, and plenty of prime and subcontracting opportunities will be available.  Turner and the Kings will host many outreach meetings to discuss contract opportunities and other questions related to the arena, such as performance and payment bond requirements, local and small business goals, and prequalification process.   The next meeting is scheduled for

Click here for the press release along with dates and locations of all the outreach meetings.

Separate yourself from the competition and get set up for performance and payment bonds!  Don’t wait for a general contractor to request a bond, make sure that as a subcontractor you already have a bond relationship established.  We can help you with this process at Surety1.  Contact us today for a consultation at 916-737-5723.