Surety bonds have been around for some time, and have taken many different forms. Surety bonds written on stone tablets throughout history have been discovered. It is fascinating to know that long before present day, people were already conducting business according to written agreements known currently as surety bonds.

In 2, 750 B.C., a farmer had to leave his farm since he was drafted into the king’s army. Another farmer offered his services to take over the farm, and the two farmers agreed to split the farm revenue evenly. A merchant served as a surety by ensuring the second farmer would stick to his word of taking care of the farm. The surety  contract between the three men was written on a Mesopotamian tablet. In this case, the principle was the second farmer that took over the farm, the obligee was the farmer who owned the land, and the surety company would have been the merchant. 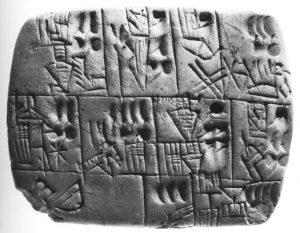 In 1889  a stone tablet dated back from 2400 B.C. was found by a group of archaeologists working in Nippur, Iraq. Dating back to the time of 2400 B.C., Nippur used to be Mesopotamia. The surety bond was connected to the reign of the Babylonian King Dungi who ruled for 58 years. After the bond was discovered, the archaeologists found that the bond was written by some type of professional scribe or notary. Four names of witnesses’ seals were impressed onto the tablet also. For this surety bond, the currency was corn which was used to pay for the surety bond.  The scribes offered their services of providing  binding legal agreements. The bond promised the payment of grain from the principle while the surety bond guaranteed to reimburse the obligee if the principle did not pay the dues owed. Up until 1900, more than 30,000 cuneiform tablets similar to this surety bond were discovered by archaeologists. These tablets provide literary, grammatical, economic, and historical significance representing the Mesopotamian period.