The History of Paved Roads In America Part 1


The history of paved roads in America before the Eisenhower administration.

Americans travel many miles on paved roads every day. We use roads to get us to work, home, or a night on the town. Despite how often we use roads, we rarely think about their colorful pasts. 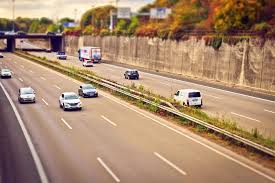 Paved roads have come a long way since they were first made in 4000 B.C. Lots of work has gone into the smooth, sturdy roads we take today.

The first paved roads in the world were in ancient Mesopotamia. They were made of large stones, unlike the concrete and asphalt roads we use today. As more time passed, people began to build more roads on routes that experienced lots of traffic. More traffic on certain roads required the roads to become stronger and more reliable.

Because of this, engineers of the 18th century began to build roads with many layers. Roads used to be made in three layers, with stone at the very bottom and gravel at the top. During this time, roads began to be built with raised centers to assist with water draining. This way, when it rained heavily, water would roll from the raised center of the road and off of the sides, thus preventing floods. This system is still used widely today. [1. Longfellow, Rickie. “Back in Time: Building Roads”. U.S. Department of Transportation, Federal Highway Administration. https://www.fhwa.dot.gov/infrastructure/back0506.cfm]

This style of road became more common as time went on. Later, when America was settled, gravel and paved roads were built throughout the country. These roads were still not as large or as high-tech as they are today until cars became popular. Cars really took off in 1908 when Henry Ford created the Model T.[1. “How the Wheels Got Turning: A Historical Perspective on American Roads”. http://inventors.about.com/library/inventors/blcar3.htm] Because cars grew more common after this, roads became more important. This led to Congress passing the Federal-Aid Road Act eight years later in 1916. This law gave funding to states for them to improve their roads. There was very little consistency among the ways different states built and organized their road systems, and there still weren’t any Interstate Highways. The Interstate Highways we use today did not come about easily.

The Birth of the Interstate Highway

The first step in the production of the Interstate Highways we use now was the Federal Highway Act of 1921. This law authorized the Bureau of Public Roads to fund state highway agencies. The goal was to construct an interstate system of two-lane, paved highways. Later, during the Great Depression of the 1930s, the focus of road building changed. States focused on building several small roads instead of interstate highways as a way to provide as many jobs as possible.

Because states were hiring many different people and businesses to build roads, the government needed a way to ensure that all contributors to the roads would be paid. If private companies pay for something to be built, the common law has always ensured that the private agency pays everyone who provides materials. Before 1935, though, if the government was funding a project, material providers were not as well protected.

To fix this, the federal government passed the Miller Act of 1935. This act requires contractors to post a performance and payment bond if they are building or repairing any public project. These bonds guarantee that sub contractors and suppliers are paid and the project is completed at no additional cost to the taxpayers.   [1. Wallick, Robert D. and Stafford, John A., “The Miller Act: Enforcement of the Payment Bond”, 1964, Duke University Press, http://scholarship.law.duke.edu/cgi/viewcontent.cgi?article=3010&context=lcp] The surety bond protects the government and anyone who sells construction materials by holding the contractors accountable. The surety bond ensures that the contractor will pay what they owe.

The Miller Act of 1935 protects agencies involved in federally funded federal projects, but it does not apply to public projects funded by state governments. Because of this, many states passed “Little Miller Acts” in the years following 1935. These laws work the same way as the original Miller Act, but they apply to projects funded by the state the law was passed in. [2. Wallick, Robert D. and Stafford, John A., “The Miller Act: Enforcement of the Payment Bond”] Because of the original Miller Act and the following Little Miller Acts, almost every public works project, including building a paved road, requires a surety bond. Paving contractors still are required to post these historic surety bonds.

Roosevelt’s Effect on the Highway System

After the passing of the Miller Act in 1935, a massive Interstate Highway system began to seem like a possibility. Now, the government could safely fund the construction of many highways by ensuring, through the Miller Act, that everyone would receive payment for them. This new possibility caused President Franklin D. Roosevelt to pass the Federal-Aid Highway Act of 1938. This act created a group to study the possibility of an Interstate Highway system. In general, the American public supported the idea of a new Interstate Highway system. Sadly, Roosevelt’s political opponents did not. They viewed the highway plan as another form of Roosevelt’s famous “New Deal” economic system. [1. Weingroff, Richard F. “Federal-Aid Highway Act of 1956: Creating the Interstate System”. Public Roads, http://www.fhwa.dot.gov/publications/publicroads/96summer/p96su10.cfm] Then, in 1941, the Interstate Highway system construction was sidelined again as the US became more involved in World War II. Instead of building the highways that the public wanted, all of the government’s resources were dedicated to building roads that the military needed.

By the time the war ended, the roads commonly used by the public were in disrepair. Traffic congestion became a huge problem. As a result, Roosevelt wanted to rush the construction of highways after the war.  He also thought that beginning a massive public works project like this would make sure that returning soldiers could find jobs in road construction. Alas, this did not go as planned. There had not been enough research done to successfully build the highways. People couldn’t agree on whether the roads would be built in rural or urban areas. The funding for the roads had not been sorted out either. In the end, nothing changed. The Interstate Highway system that was dreamed of by so much of the American community remained just that: a dream. [2. Ibid.]

Research on how to create the highway system continued. When the US entered the Korean War in 1950, though, the highway program was overlooked. Again, resources for road building were dedicated almost entirely to military needs. The only improvement made in this time was the passing of the Federal-Aid Highway Act of 1952 by President Truman. This law provided $25 million dollars to state agencies for the construction of highways. In Truman’s plan, the interstate highways would be funded half by the states they were built in and half by the federal government. Unfortunately, his plan had many flaws. The $25 million dollars given to this cause were not enough to build anything substantial. Also, states that didn’t feel as strong of a need for a highway system were less willing to fund the expensive endeavor. Other states felt that, because it was a national project, the federal government should pay for more of it. As a result, the Interstate Highway system could not really begin construction until 1953. This was when Eisenhower, the Hero of the Highways, came into office as the 34th President of the United States.

Surety1.com is a service of AssuredPartners one of the largest and fastest growing insurance agencies in the nation. Surety1.com is the premier online provider of surety bonds nationwide since 2003. To apply for surety bond, visit us here.